"These recipes have been developed as an antidote to the dreaded, damp-cardboard vego meals of yesteryear," he writes in the introduction to his latest cookbook More.

"Those exercise in monastic monosyllabic blandness that are still peddled by some wellness bloggers and 'worthy' cookbooks; cookbooks too often written by people who don't love to eat; people who often fear rather than love food."

And Preston loves food. It's hard not to be won over by his enthusiasm, whether that be his descriptions of his recipes, or his obsession with the history of food, as he heads off on tangents talking about how a plant-based diet is the basis of a lot of cultures.

More came about after 2017 book Yummy, Easy, Quick included an index "for the vegetarian in your life". He started thinking about recipes where no one would notice that meat or fish was missing, where vegetables reclaimed their place in the pecking order. He started thinking about new ways to bring flavour through different cooking techniques, or spices and condiments.

He started eating differently too, moving his diet away from meat and carb-focussed dishes like bolognese, lasagne, steak and potatoes, curry and rice. And he's noticed the difference.

"Whenever you say vegetarian there's this sanctimonious air of purity that comes with it," he says.

"The moment you start throwing maple syrup, miso, Japanese mayonnaise, at vegetables they become just as decadent as any steak."

Preston wants people to cook from his cookbooks. He remembers being told that a cookbook is considered a smash hit if someone cooks three recipes from it, but that doesn't stick with him. "The whole point of a book is I want you to at least find two recipes that become part of your repertoire, the things you cook on a regular basis," he says.

I mentioned his Collapsing flourless chocolate cake from Fast, Fresh and Unbelievably Delicious has become my go-to recipe. I can almost remember the ingredients without even getting the book off the shelf. He loves that. And too, that I've been cooking non-stop from this one already, with a vegetarian daughter, but a son who loves his meat.

"You want to find recipes where you don't have to cook two meals," the father of three teenage children knows where I'm coming from.

One of the highlights of this book is the "Meaty Additions", suggestions on some, not all,, recipes for the household carnivore. There's a meat appendix which offers simple switches, and basic recipes for such things as crispy prosciutto shards (to add to, for example, a primavera bake with pea and pumpkin seed pesto), or slow-roasted lamb shoulder (that goes with the herb rice salad bowl).

It's his "safety net" in a way but he urges us to take the risk.

"There's a vegetarian lasagne with all the colours of the Italian flag, layered with zucchini. It's so much quicker than making a traditional lasagne, it has great texture, and you go and put spinach in the bechamel to make it look green and that means there are more vegetables.

"It gives you a real, surprising bang, for your buck. You don't say I wish there was some bolognese here, you go ooh this is delicious."

And that's the whole point. 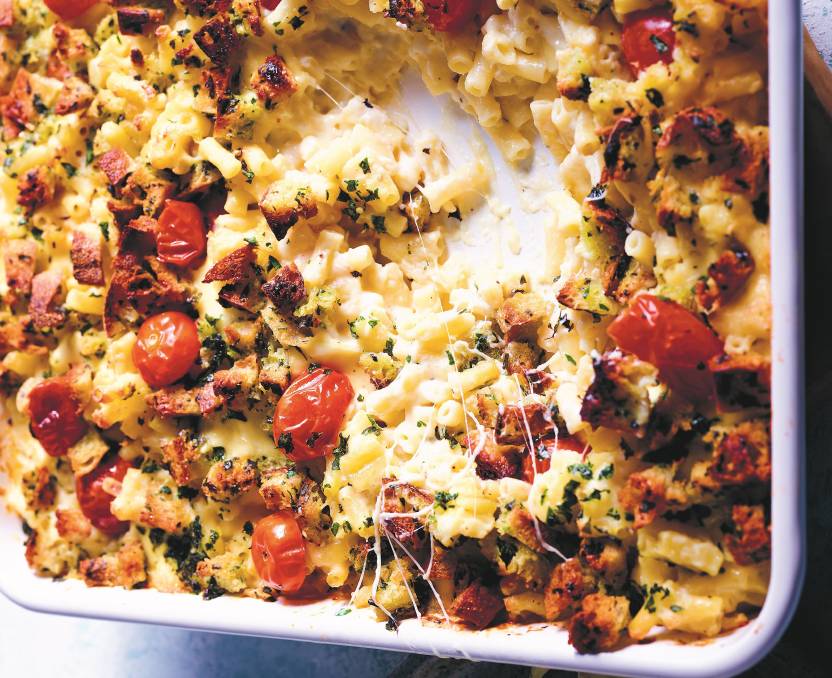 Who doesn't love garlic bread with their pasta? So why not combine these two favourites into one dish? That's the sort of thinking that should see a certain prize committee in Oslo sitting up and taking notice. Failing that I'll settle for the World Food Prize for 2019 ... Sure, last year's winners Dr Lawrence Haddad and Dr David Nabarro's complementary global leadership in elevating maternal and child undernutrition within food security issues was most laudable, but it was no mac 'n' cheese with a garlic bread topping!

2 golden shallots, finely chopped (yes, you could use that 1/2 red onion sitting forlornly in the fridge instead)

2. Cook the macaroni in a saucepan of boiling salted water for two minutes less than it says on the packet or until just al dente. Drain and return to the pan.

3. While the pasta cooks, melt the butter in a saucepan over medium heat. Add the shallot and cook, stirring, for three minutes or until soft. Stir in the flour for one minute or until the mixture bubbles. Remove the pan from the heat and gradually whisk in the milk until smooth. Return to medium heat and simmer, stirring, for two minutes or until the mixture boils and thickens. Stir in the cheddar until melted and combined, then season with salt and pepper.

4. Pour the sauce over the pasta and toss together.

5. Cut six of the tomatoes in half and set aside. Add the remaining whole tomatoes to the pasta mixture and stir to combine. Spoon into a medium baking dish. Arrange the reserved halved tomatoes on top, cut-side down. Scatter over the cherry bocconcini and gently press them down.

6. To make the garlic breadcrumbs, combine all the ingredients in a bowl.

7. Scatter the breadcrumbs over the macaroni mixture, allowing some of the tomatoes and bocconcini to show through. Bake for 30 minutes or until the top is golden and crisp.

Tip: I'm warming to the idea of a pasta bake with a garlic bread crust. Layer slices of bread on top, overlapping like potatoes on a Lancashire hotpot, then brush with garlic butter as it cooks. OK, I admit it. I have an obsession with sweet corn. Partnering it with sweet potatoes, sweet maple syrup, onions and capsicum whose sweetness has been amplified by time on the grill means we need to bring some sour and salt to the party. So don't be shy with your seasoning! That's the way to get this fiesta started ...

125g your favourite good-quality mayonnaise, whether that's vegan or vegetarian

1. Preheat a barbecue grill and flatplate with a lid on high to get it really cranking.

2. Pull back the corn husks and remove any stringy silks. Pull the husks back over the corn and dampen the cobs with water.

3. Toss the sweet potato and half the olive oil in a bowl. Season well.

4. Place the corn on the hot grill and the sweet potato on the flat plate. Put the lid down and cook, turning halfway through, for 15 minutes or until just cooked through.

5. Meanwhile, to make the chipotle mayo, combine all the ingredients in a small bowl. Keep adding chipotle until it reaches the flavour and heat you want.

6. Remove the corn from the grill but continue to cook the sweet potato, turning occasionally. Using a tea towel, carefully pull back and remove the husks (take care not to burn yourself). Remove any silks still attached, then return the corn to the grill.

7. Add the capsicum to the grill and the onion to the flat plate and drizzle with the remaining oil. Continue to cook all the veggies with the lid up, turning occasionally, for a further 10-12 minutes or until the onion is golden and the other vegetables are nicely charred.

8. Transfer the corn, capsicum and sweet potato to a tray. Drizzle the onion left on the flat plate with the maple syrup and cook for three to five minutes, until caramelised and sticky. Transfer to a bowl.

9. Use a large knife to cut the corn from the cobs, then cut the capsicum into thick strips.

10. Arrange the sweet potato, corn and capsicum on a serving plate and season with salt. Dollop on the chipotle mayo, then top with the maple syrup onion, pecan halves (if using) and coriander leaves. Serve with lime wedges. I love the way that haloumi can show you so many faces in the kitchen: golden and squeaky, milky and soft, or grated and mixed with dill or mint for a buttery hand-pie filling. Here, the saltiness of the haloumi enjoys the sweet embrace of juicy peach as it tans on skewers.

pomegranate arils (that's the ruby-like seeds to you and me), to serve (optional)

1. Soak 12 bamboo skewers in cold water for 30 minutes to stop them burning during cooking. (Alternatively you can use metal skewers.)

2. Use this time to get your couscous done. Place the couscous in a heatproof bowl. Pour the stock into a saucepan and bring to the boil over medium heat. Pour it over the couscous and set aside for five minutes or until all the liquid has been absorbed. Add the butter and let it melt, then fluff up the grains with a fork.

3. Preheat a barbecue grill with a lid on medium-high.

4. Thread the peach wedges and haloumi cubes alternately onto the skewers. Place on a tray.

5. Drizzle the olive oil over the skewers and season well with salt and pepper (you won't need too much salt as the haloumi is already quite salty). Place the skewers on the grill and close the barbecue. Cook for three to four minutes each side or until the haloumi is golden and the peach is charred and tender. Transfer to a plate.

6. Meanwhile, to make the hot honey dressing, place all the ingredients in a small saucepan and stir over low heat until combined and warmed through.

7. Add the rocket, pistachio and mint to the couscous and toss until well combined. Season with salt and pepper and transfer to a serving platter.

8. Top the couscous with the skewers and drizzle with the dressing. Sprinkle with pomegranate arils, if desired, and eat immediately.

Meaty addition: Halve 18 prosciutto slices lengthways and wrap each one around a peach wedge before threading onto the skewers. Alternatively, serve with barbecued or chargrilled whole beef fillet as part of a shared meal. This is the sort of curry that is studying for an engineering degree in an Aussie uni and driving for Uber at the weekends to pay for his accommodation. He would rather join the Swami Army than be a Fanatic but he still thinks Gilly was a great man. Thoroughly likeable.

400g can chickpeas, rinsed and drained

2. Place the carrot and two tablespoons of the coconut oil in a roasting tin and toss to coat. Roast, turning once, for 40 minutes.

3. Meanwhile, heat the remaining coconut oil in a large frying pan over medium-low heat. Add the onion, chilli and coriander stalk and root and cook, stirring regularly, for 10 minutes or until softened but not browned. Add the garlic, ginger and curry powder and cook, stirring, for 30 seconds or until aromatic. Pour in the coconut milk and stock and bring to a simmer. Simmer gently for five minutes, then stir in the chickpeas and remove from the heat.

4. Reduce the oven temperature to 180C/160C fan-forced. Scatter the cashews over the carrot and roast for 10 minutes or until the cashews are golden.

5. Add the beans to the roasting tin and pour over the chickpea mixture. Roast for a further 10 minutes or until the curry has thickened slightly. Serve with rice and lime wedges.

This story More than just vegetables first appeared on The Canberra Times.