He's best known for his stage and screen roles but Tim Draxl will launch a new creative front this January when he opens his first solo art exhibition in Katoomba.

It's a quick ascent for the acclaimed performer who took up painting as an outlet for his own creativity, with no real thought of ever exhibiting his paintings. 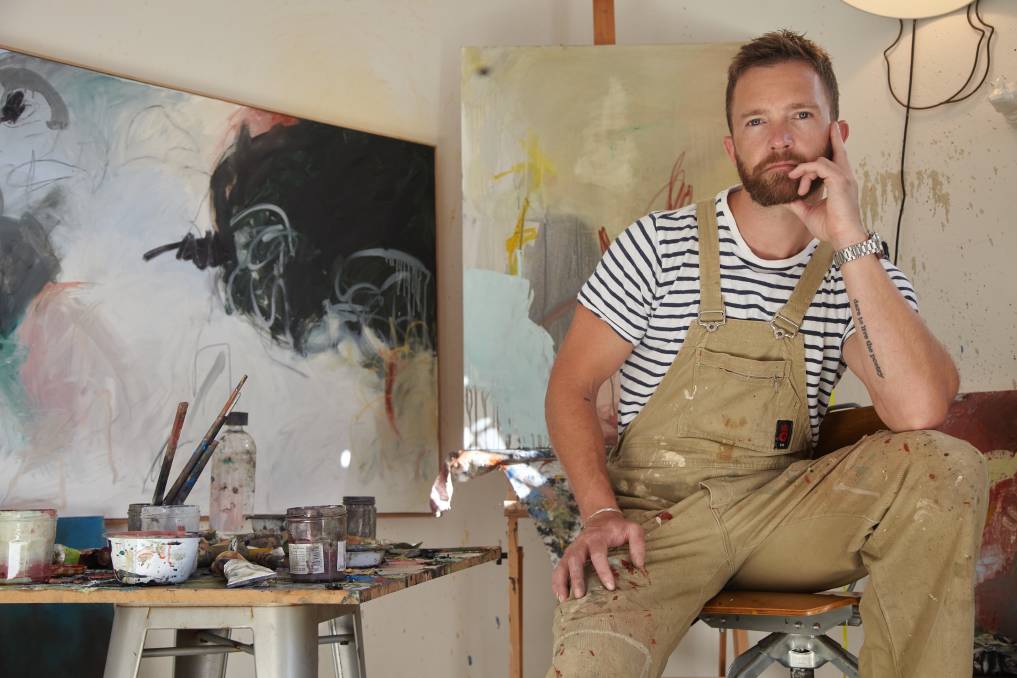 "As a painter you kind of fantasise that someone is going to see a painting one day and go: 'I'd like to offer you a solo exhibition' - and that's exactly what happened... People paint for years and years and don't get that kind of opportunity. I was just giggling to myself - and I still do it - that this has come to fruition. It's quite amazing and very exciting," he said.

Known to television audiences for his performance as Dr Henry Fox in A Place to Call Home, Draxl's other small screen credits include Serangoon Road, Miss Fisher's Murder Mysteries and The Shark Net, while his film roles include A Few Best Men and Swimming Upstream. On stage, he has thrilled audiences with leading roles in Only Heaven Knows at Hayes Theatre and Torch Song Trilogy at Darlinghurst Theatre Company. Dubbed Australia's best cabaret artist by the Sydney Morning Herald, he has performed around the world, including at the prestigious New York Cabaret Convention.

When the Gazette spoke to the Sydneysider in late December he was isolating in a Melbourne hotel, ahead of filming a role in a new Liam Neeson movie, Blacklight.

"Just working at the moment is a huge privilege and I think everyone in our industry is feeling the gratitude of being able to go to work in Australia even with all the extra provisions that are in place because of COVID," he said.

Draxl plays the editor of a news publication who breaks a story "that kind of gets him into a bit of trouble" in the $43 million film, helmed by the creator of Netflix hit Ozark, Mark Williams.

The high profile project went into production as Draxl was juggling shooting dates for an upcoming ABC television drama series, The Newsreader, also produced in Melbourne.

It was a different story at the start of 2020 when COVID-19 struck. Draxl was about to star in a new stage production of A Chorus Line in Sydney when the pandemic forced the show's cancellation on the day of opening night (the Darlinghurst Theatre Company production will now open in August).

"There were tears shed and a lot of fear about what was going to happen... There were so many unknown variables," he said.

"When COVID hit my partner and I went down to the south coast (Minnamurra near Kiama) to my mum's property to basically look after my mum because she was in the high risk bracket and couldn't really leave the house," he said.

Artistic pursuits soon took a backseat to COVID-safe expeditions to the supermarket for his 79-year-old mother.

"The creative part of my brain really shut down. I don't know if that was some kind of survival mechanism, that my body went: 'That's not an essential thing right now'."

It was only after a virtual concert for the Sydney Opera House in June that Draxl started to reawaken his artistic side.

"Once I did that, and got into some kind of creative flow, that's when I started going back into the studio. It was really just for myself, there was no mention of an exhibition [at that stage]."

In an artist statement post on his Instagram page, Draxl said there are many similarities between painting and performing. "My paint clothes are my costume, my studio is the performance space, and in the act of painting, I am a painter creating emotion through the very real use of colour," he wrote.

Although he has always "dabbled" with painting, Draxl's partner encouraged him to take it more seriously several years ago by renting a studio in North Bondi.

"The more that I'm in the studio, the more I realise how interconnected painting and performing are," he said. "With certain brushstrokes, or certain ways I manipulate the paint on the canvas, there are specific correlations between that and the way I sing a note. When I paint something that's a solid line, it's very similar to the way you approach a note in a song where you sing it very directly and clearly."

But unlike stage and film work, where collaboration with others is crucial, painting offers Draxl complete control.

"I love the freedom of painting. I can create whatever I'm feeling at that particular time and that is incredibly satisfying as well," he said.

Titled IN BETWEEN | The Act of Painting, the exhibition in Katoomba features new works that "occupy the in-between spaces".

"It's a space I have often found myself in as an actor between jobs. It's a space between who I project to be in public and who I am in private - a conscious space in which I make the decision to present as one way or the other," said Draxl.

He found himself unexpectedly reflecting on these matters in Melbourne where he was isolating at the same hotel he stayed in when making television appearances at the start of his career.

"The last time I stayed here would have been in the late '90s when I used to come and do Good Morning Australia with Bert Newton so it's brought back a lot of memories of how I was back then, which was incredibly self-conscious and very censored," he said. "I wasn't comfortable with my sexuality. I used to try and tell myself that I had to be a certain way because the industry told me I had to be a certain way. I wasn't allowed to be gay. I had to behave to heteronormative standards and all that kind of palava. As I've grown older and let those things go it's allowed me to be more authentic in every aspect of my life and my performing career in particular."

At 39, Draxl is certainly far more comfortable in his skin, embracing the multi-facets of his personality from the contemplative painter to the body-proud poster of Instagram thirst traps.

"I have so many different personality traits, nothing is black and white," he said. "But I will say that it's all about being authentic and being true to yourself so that's what I try and do with those social media platforms. It's about balance. It's about showing all sides of myself, which is being in my Speedos, and training, and swimming at the pool, and then all the other sides of my career too where I'm fully clothed!"

His personality may be multi-faceted but his latest artistic venture shows he is definitely multi-talented. As a singer-dancer-actor turned painter, is Tim Draxl now officially a quadruple threat?

"You're the second person who's said that and I love it. Yeah, I'll take that, for sure," he laughed

But the overwhelming feeling he has ahead of his art exhibition is one of gratitude.

"What I'm doing [with this exhibition] is on a very modest scale, so it's baby steps... I've spent 23 years in this industry trying to find my voice as a singer and an actor, and that is still an ongoing process that I work on constantly. As a painter I'm at the beginning of that journey."

Tim Draxl's IN BETWEEN | The Act of Painting opens on Saturday, January 9 at Rex-Livingston Art + Objects in Katoomba, where it will run through mid-February. Details: www.rex-livingston.com.