You probably didn't even realise, when you got up this morning, just how much you don't know about earthquakes.

An earthquake in Victoria, felt as far away as Tasmania and the NSW Central Coast, was 5.9 on the Richter scale.

The earthquake's epicentre was at Gaffneys Creek, near Mansfield, about 190 kilometres' drive north-east of Melbourne at the foothills of Victoria's high country.

Here's the lowdown on earthquakes from the experts at Geoscience Australia.

What is an earthquake?

Earthquakes are the vibrations caused by rocks breaking under stress. The underground surface along which the rock breaks and moves is called a fault plane.

The focus, or "hypocentre", of an earthquake is the point where it originated within the Earth. The point on the Earth's surface directly above the focus is called the earthquake epicentre.

A magnitude 8.6 earthquake releases energy equivalent to about 10 000 atomic bombs of the type developed in World War II. Fortunately, smaller earthquakes occur much more frequently than large ones and most cause little or no damage.

Earthquake magnitude was traditionally measured on the Richter scale. It is often now calculated from seismic moment, which is proportional to the fault area multiplied by the average displacement on the fault. 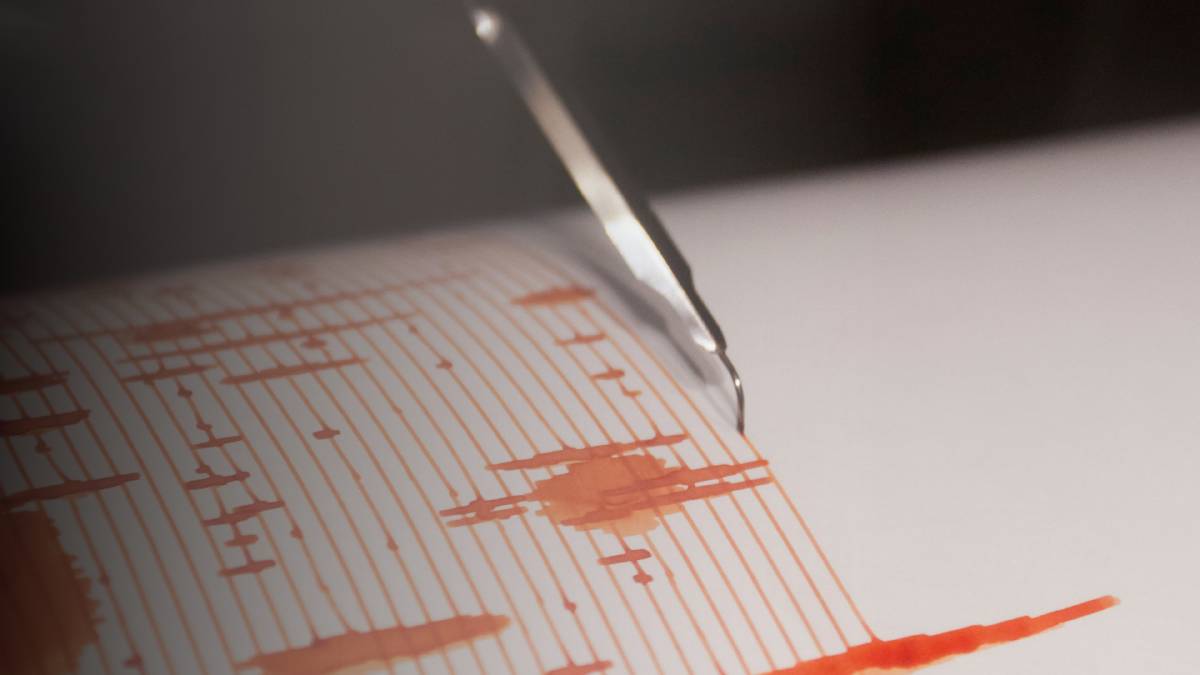 Where do earthquakes occur?

No part of Earth's surface is immune from earthquakes, but some regions experience them more frequently than others. They are most frequent and largest at tectonic plate boundaries where two plates are colliding and/or sliding past one another. They particularly occur around the margins of the Pacific Plate, for example in New Zealand, Vanuatu, the Solomon Islands, Papua New Guinea, Japan and the Americas, and also along the Indonesian islands arc, where the Indo-Australian Plate collides with the Eurasian Plate. The depths of focus in these collision zones can range from the surface to 700 km in depth. Large shallow earthquakes also occur where two plates are pulling apart with the creation of new oceanic crust along mid-ocean ridges and on the transform faults that intersect them.

In the relatively stable interior of continents, away from plate boundaries, earthquakes are less common and do not follow easily recognisable patterns. These 'intraplate' earthquakes generally originate at shallow depths (i.e. less than 20 km), but can still be of large magnitude. In 1811-1812 four earthquakes of estimated magnitude 7 occurred in the New Madrid region of the eastern United States. More recently, the magnitude 7.7 2001 Bhuj earthquake in intraplate India killed more than 20,000 people.

Australia's largest recorded earthquake was in 1988 at Tennant Creek in the Northern Territory, with an estimated magnitude of 6.6. It occurred in a sparsely populated area and resulted in damage to a major gas pipeline. A magnitude 6.5 earthquake at Meckering in 1968 caused extensive damage to buildings and was felt over most of southern Western Australia. These earthquakes are two of the eleven that are recorded to have produced surface rupture in historical times, forming fault scarps.

Quakes don't have to be 'the biggest' to do mass damage

In 1989, on December 28, earthquake measuring 5.6 on the Richter scale hit Newcastle. The earthquake's epicentre was approximately 15 kilometres from Newcastle's central business district.

That earthquake caused 13 fatalities; and 160 people were injured.

Over 350 fault scarps are mapped across Australia, with the majority being thought to relate to large pre-historical earthquakes. Study of these features allows for patterns in the recurrence and magnitude of the largest Australian earthquakes to be inferred. While large earthquakes are seen to have occurred across Australia, failed rifts and the margins of the ancient cratonic building blocks that make up the continent are seen to be particularly earthquake-prone.

Why do we get earthquakes in Australia?

The Australian plate is the fastest moving continental land mass on Earth and is colliding into the Pacific plate to Australia's north and east, and the Eurasian Plate to the northwest. This generates mainly compressive stress in the interior of the Australian continent, which is slowly building up across the plate as it moves northeast about 7cm per year. Australia's earthquakes are caused by the sudden release of this stress when rocks deep underground break and move along a fault line. While some parts of the country are more likely to experience earthquakes than others, large earthquakes can occur anywhere across the continent, and without warning.

Why are earthquakes felt in different ways?

Magnitude is only one indicator of the expected impacts that an earthquake can have in any given region. The resulting severity of shaking during an earthquake is affected by other specific and unique factors such as the depth of the earthquake, local geology and soil conditions.

Building damage also depends on the quality and type of construction. Clearly, the distance from the epicentre will also have an effect on the vibrations felt at a location.

Earthquakes cannot be predicted. An earthquake can only be alerted for its time, location and magnitude once it has been recorded and analysed by the Geoscience Australia Duty Seismologist. Firstly, the seismic energy must be large enough to reach a minimum of three seismometers. This can take about 3 to 4 minutes.

Once the location of the earthquake has been computed, the magnitude can be determined. This can take a further 3 to 4 minutes. So earthquake are generally notified in about 10 minutes, but are always alerted as soon as possible.

Sometimes the alerts can be as quick as 6 to 7 minutes depending on the distribution and number of seismometers around the epicentre. However, small earthquakes with magnitude less than 2.5 can take longer as the seismic waves can sometimes be difficult to analyse.

Letting the community know when an earthquake occurs

Earthquake alerts are important for emergency managers and the general public. For small earthquakes that occur nearby, the tremor may sound like an explosion or a strong thud, like something has smashed into the house.

For large, potentially damaging earthquakes which may shake an entire State, the need for an immediate emergency response to save lives becomes vital. Although a large area or region may have been impacted by the earthquake's shaking, the earthquake alert provides emergency responders the location of the most likely areas of greatest damage and where to initially focus their rescue efforts.

What to do in an earthquake

There are a number of ways to remember what to do if an earthquake occurs. People who experience an earthquake should stay indoors and seek shelter under a table, bench or door frame - you can remember to "Drop, Cover, Hold" when you feel an earthquake. Afterwards it is vital to stay vigilant - expect possible aftershocks, listen to the local radio for updates, avoid using phones or driving, stay calm and help others if possible.

You can help Geoscience Australia's earthquake research by reporting if you have felt an earthquake. More information can be found on our website at www.ga.gov.au/earthquakes.

This information has been reproduced with the permission of Geoscience Australia.