The Omicron variant has now arrived on Australian shores following the confirmed positive testing of travellers who arrived in NSW at the weekend.

The strain - known as the B.1.1.529 or Omicron variant - originated in southern Africa and was reported to the World Health Organisation (WHO) around November 24, 2021, although it's assumed the variant has been circulating since about September.

It is now one of five variants so far to be classified as a 'variant of concern' (VOC) by the WHO. These are the Alpha, Beta, Gamma, Delta and Omicron variants.

There are, however, two other variants - Lambda and Mu - that remain classified as 'variants of interest' (VOI), and for comparison's sake, the Delta strain was classed first as a VOI before it became a VOC and led to widespread lockdowns across Australia.

Whether this strain is resistant to the vaccines is yet to be seen, but experts are concerned that this strain has the most mutations so far seen on a coronavirus variant.

It has about 32 mutations on the original variant, as opposed to the Delta strain which had about half that.

Given it's so new, very little is known about the Omicron variant. But, here's a basic rundown of everything the experts are saying about this new variant.

How was it discovered?

"The epidemiological situation in South Africa has been characterised by three distinct peaks in reported cases, the latest of which was predominantly the Delta variant," said Dr Vinod Balasubramaniam from the Jeffrey Cheah School of Medicine Health Sciences Monash University, Malaysia.

"In recent weeks, infections have increased steeply, coinciding with the detection of B.1.1.529 [Omicron] variant.

"This variant has a large number of mutations, some of which are concerning. Preliminary evidence suggests an increased risk of reinfection with this variant, as compared to other Variants of Concern." 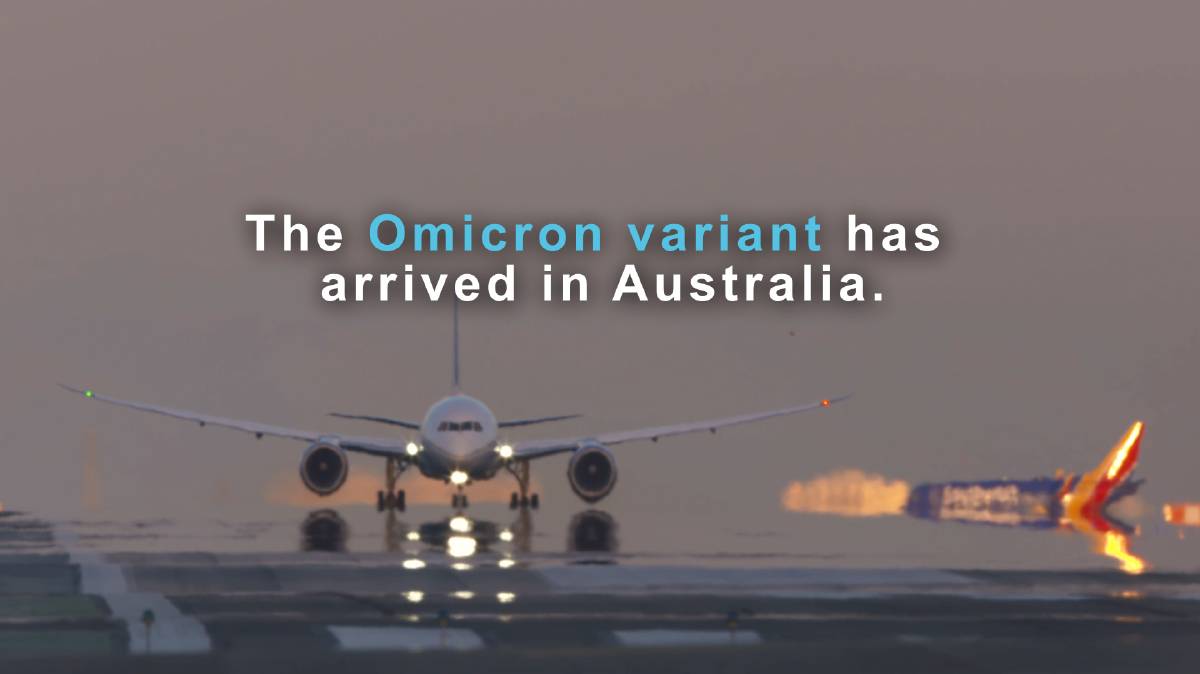 IT'S HERE: Australia is now bracing against the possible emergence of more Omicron variant cases.

The number of cases of this variant appears to be increasing in almost all provinces in South Africa.

Now, 90 per cent of new cases in Gauteng, South Africa are linked to the Omicron variant and over the weekend, the country's new daily cases jumped from around 200 to 3200.

"This variant has been detected at faster rates than previous surges in infection, suggesting that this variant may have a growth advantage," Dr Balasubramaniam said.

Is this strain vaccine resistent?

Quite simply, we don't yet know how the Omicron variant will respond to vaccines, as explained by Professor Raina MacIntyre from UNSW's Kirby Institute for Infection and Immunity in Society.

"We do not have enough data to determine vaccine effectiveness against Omicron or disease severity, so any claims about either at this stage are not evidence-based," Professor MacIntyre said.

There is however, some suggestion in the preliminary analysis of the pathogen genomics, that this variant may had a "degree of vaccine escape" in it.

"Vaccines will still likely provide protection against severe disease, but we do not yet have data to quantify this," Prfoessor MacIntyre said.

So far, experts have been able to gather that the R0 profile of the Omicron is much higher than it was with Delta, which means its mutations have made it likely more transmissible.

It may mean that it will spread faster and farther and prove to be more infectious than the Delta strain was.

"This makes border control important in the short term to buy us time to get our third dose coverage high, vaccinate kids and make procurement plans for vaccines and antivirals," Professor MacIntyre said.

"We must also address safe indoor air, and keep using masks in indoor spaces. It is critical to maintain high testing and tracing rates in Australia.

"Moves to stop QR codes, or in the case of Victoria, to get infected patients to notify their own contacts, will make epidemic control impossible if this variant takes off."

How concerning is this new variant?

Experts are hopeful that the high vaccination rate will reduce the severity of illness produced by this new variant in the community.

"For example, Lambda and Mu have not taken off globally."

"It is possible that the new variant, Omicron, could hopefully fizzle out," said Associate Professor Senanayake.

"But Omicron is troubling in terms of its mutations and the limited infections that have been seen in people.

"It has a lot of mutations, more mutations than seen before with previous variants.

"Many of these are on the spike protein and the receptor binding domain. Some of these mutations can increase transmissibility of the variant, while others can help it evade the immune system: a worrying combination."

The Omicron variant may also increase the risk of reinfection for people who have recovered from COVID-19 already.

"It is still early in the discovery of the variant, so time will tell if these initial trends persist," said Associate Professor Senanayake.

"It will also take time to determine the effectiveness of our current vaccines against Omicron, involving both observational and laboratory data."

Will border closures stop the spread?

Dr Vinod Balasubramaniam believes border closures "would be doing more harm than good" given that the virus is now already in Australia.

"We have to remember that you can't stop a respiratory virus from coming in with travel because there's all sorts of other ways that it can be introduced into the country like through supply chains," Dr Balasubramaniam said.

"Let's not forget that the virus already being discovered in other countries including Belgium, Hong Kong and Israel.

"Let us also not forget that when the Delta strain was initially discovered and announced, it was found in 53 countries within three weeks, clearly indicating that blanket closure of borders is not the most sustainable way to counter this."

Instead, experts are advocating for an increase in the efforts to vaccinate the world equally.

"A more effective way to prevent the variant's spread would be to increase vaccination rates in south African countries as opposed to locking them out from the rest of the world," Dr Balasubramaniam said.

How do new variants emerge?

The short answer is it comes down to chance. Dr Vinod Balasubramaniam explains, "it's a random process, a bit like rolling dice".

The more times you roll the dice (or the more people who are affected with the virus), the more chances you have of coming up with a different number (or seeing new variants appear).

"Every time the virus reproduces inside someone who is not vaccinated, there's a chance of it mutating and a new variant emerging. This is a numbers game," Dr Balasubramaniam said.

"Let us not forget that in South Africa, where just 35 percent of people are fully vaccinated, the variant has begun to spread rapidly. A number of factors could be contributing to the rising caseload, including the nation's low vaccination rate.

"Vaccine equity is a global problem! If we don't address this quickly enough, our exit from the pandemic will be set back, possibly for months or years on end."

This story Everything you need to know about the Omicron variant first appeared on The Canberra Times.