Said pilgrim Jacqui Holden: “When I registered [for the pilgrimage] I wasn’t sure whether I’d be able to make it. It’s been one of the toughest things that I’ve done in a long time but it was so worth it - not only was I able to finish, but I was able to deepen my faith and gain friendships that will last me a lifetime. “ 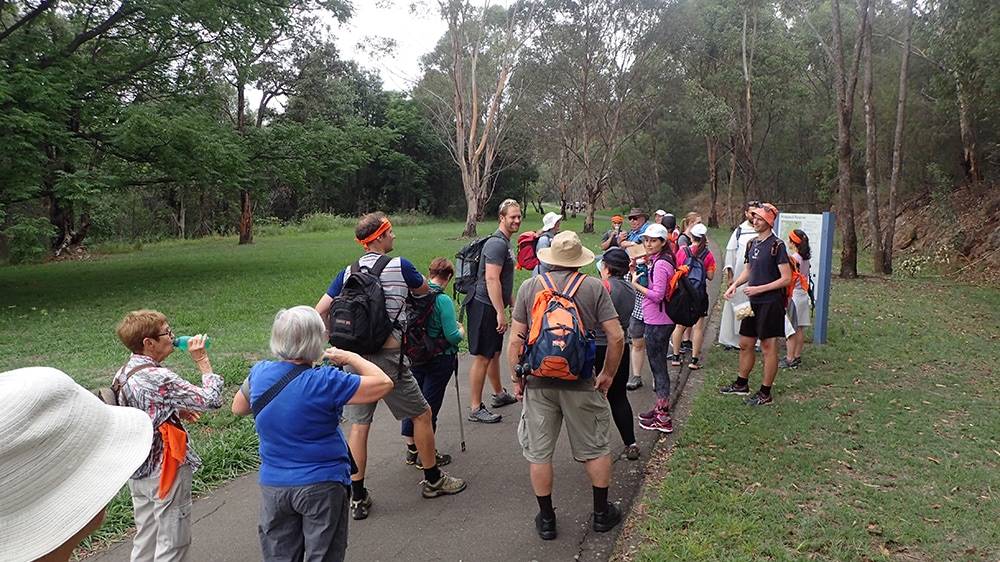 Setting out from Emu Plaints: The Epiphany pilgrims.

On January 2, Fr Michael O’Callaghan from Our Lady of the Way Parish in Emu Plains commissioned and sent forth the Epiphany Pilgrims.

Over the seven days that followed, the group journeyed both physically and spiritually along Mountains bush tracks, completing over 110km of walking and spending time in prayer and celebration at every Catholic parish in the Mountains.

The Feast of the Epiphany, which occurs annually on the first Sunday following New Year’s Day, celebrates the visitation of the Magi (wise men or kings) to the child Jesus and the revelation of God to all humanity. It is this feast and the journey of the Magi that are reflected upon throughout the Epiphany Pilgrimage.

A trial walk of the route from Emu Plains to Bell took place in 2016, but this year’s walk was the first official Epiphany Pilgrimage to take place.

Over 35 pilgrims ranging in age from 17 to 70 walked the route and were accompanied along the way by pilgrimage chaplain Fr Piotr Kruk and Sr Rosie Drum.

In addition to the walkers, over 70 people were involved in the organisation of the journey and many more joined the group for prayer, Mass and celebration.

Christine Ellis, one of the local parishioners, said the pilgrimage was “both refreshing and contagious for the local community”.

Each participant carried a stone throughout the journey to symbolise his or her life and placed it into the recently installed altar at the Chapel of the Magi in Bell to mark the end of the journey. The altar, designed by Nimbus Architecture & Heritage and sculptured by Terrance Plowright, stands as the centerpiece of the chapel which is to be constructed over many years from the stones carried by pilgrims as a physical manifestation of the Church made of living stones (1 Peter 2: 5).

Fr Piotr celebrated the first ever Mass at the Chapel of the Magi on the Feast of the Epiphany to officially conclude the 2017 pilgrimage.

Allan Alaya-ay, one of the pilgrimage coordinators, said: ‘It was both humbling and inspiring to see God at work in the lives of the pilgrims and through so many different aspects of the journey – the walking itself, the wonder of creation, the fellowship, prayer and of course through Mass and the sacraments.”

For more information about the Epiphany Pilgrimage and the Chapel of the Magi, see www.epiphanypilgrimage.org.

Next year’s Epiphany Pilgrimage will take place from Tuesday January 2 to Monday January 8.