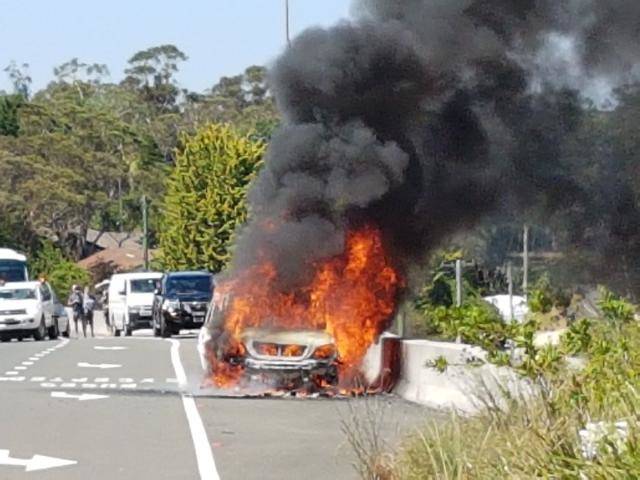 +7
Photos of a car fire on the Great Western Highway on January 30.

The driver was a man from Oberon who was travelling up the Great Western Highway with a box of ducks in the back seat.

Blue Mountains Police Acting Inspector Tracy Brickwood said the man had noticed a funny smell and then smoke started coming from under the bonnet.

He escaped from the Hyundai with the box of ducks before the vehicle was engulfed by fire and completely destroyed.

The incident occurred at about 11.10am on the highway near Wentworth Falls.

The highway was closed to westbound traffic, but all lanes have re-opened since the fire was extinguished.

However, traffic conditions remain heavy in the area,

Motorists are advised to exercise caution on the highway.

The car fire occurred at about 11.10am on the highway near Wentworth Falls on Tuesday morning.

Nearly an hour later, there are still heavy traffic conditions in the area.

The highway was partially closed for some time, but all lanes have since been re-opened.

The Great Western Highway has now been re-opened to westbound traffic.

The highway was partially closed on Tuesday morning due to a car fire near Wentworth Falls.

The incident occurred on the highway at Dalrymple Avenue at about 11.10am.

While the fire has now been extinguished, motorists should still expect delays as traffic congestion starts to ease.

The highway has reopened westbound now that this fire has been put out. Allow extra time as delays ease.
https://t.co/kSWT5DTgVp

The Great Western Highway has been partially closed on Tuesday morning due to a car fire.

Emergency services were called out to the highway at Dalrymple Avenue at about 11.10am on January 30.

The incident occurred near Wentworth Falls. 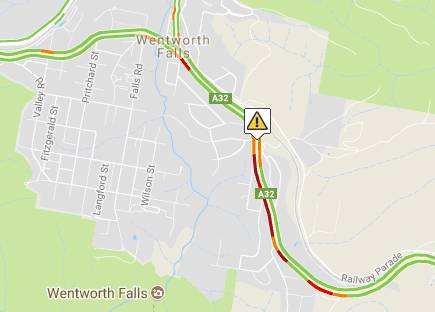 A map of where the incident occurred on the Great Western Highway on Tuesday morning. Picture: Live Traffic NSW

The highway has been closed to westbound traffic.

Motorists are advised to expect delays while the fire is being extinguished.